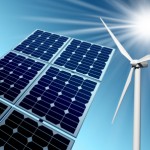 Renewable sources such as solar and wind could play a significant role in fighting global warming.
To achieve these level governments would have to spend significantly more money and introduce policies that integrate renewable into existing power grids and provide subsidies.

According to the reports of UN the use of renewables is on the rise and their prices are declining.
So renewable energy will help poor countries to use solar or wind to develop their economies in a sustainable fashion.

The development of renewable requires development of new infrastructure; the renewable energy sector will require significant investment in the next two decades of as much as $1.5 trillion by 2020 and up to $7.2 trillion from 2020 to 2030.

Greenpeace and other environmentalists said Saudi Arabia and Qatar, two oil-rich states that don’t have an interest in alternatives, successfully watered down the report’s language on the cost benefits of renewables — a charge the Saudis denied, saying they only were arguing to stick with the science.

Brazil, a major ethanol producer, opposed language on the negative effects of biofuels and hydro as well as the economic potential of other renewables.

The recent nuclear accident in Japan was not discussed and had no impact on the report’s conclusions.
From 2009 to 2010 investment in renewables has gone from $186 billion to $243 billion.

If we succeed in this goal by 2050, maybe we can stop global warming and perhaps the world will be saved of pollution.

Posted by solar-magazine.com on May 11 2011. Filed under _featured slider, Africa, Analysis & Features, Asia, BUSINESS, Canada, Europe, INDUSTRY, Legislation, Solar PhotoVoltaics, South America, USA, Wind, WORLD. You can follow any responses to this entry through the RSS 2.0. You can leave a response or trackback to this entry